Time to listen to THE BEST CHRISTMAS SONG EVER!!!

I cranked it up this morning in my office.

Have any good tutorials out there (books in particular)?

I really want to learn but I'm a bit dimwitted with the knitting/crochet stuff (like I get it for a bit then just forget it all).

I REALLY want to learn how to make all those cute little crochet critters but I'm a bit intimidated (knitting didn't go well for me, so I'm leery of crochet).

I have had these tickets since Christmas Eve of 2009. My wife gave them to me for my birthday.

I'm going to see David Sedaris, something I've wanted to do for YEARS (meaning years before I got the tickets) ever since one of my professors introduced me to "Barrel Fever" (one of Sedaris's earliest offerings).

For those of you who don't know David Sedaris is the author of a butt load of books about himself. Yeah, that's what memoirists do. His newer stuff isn't as good as his old stuff (yeah, that happens once you've been around for a while) but it's still funny and just really well written and good reading. (he's also the brother of Amy Sedaris of "Strangers with Candy" fame).

And even better, I get to go with my sister and Princess Gary (who went with me to see Augusten Burroughs, so it's extra awesome for us). 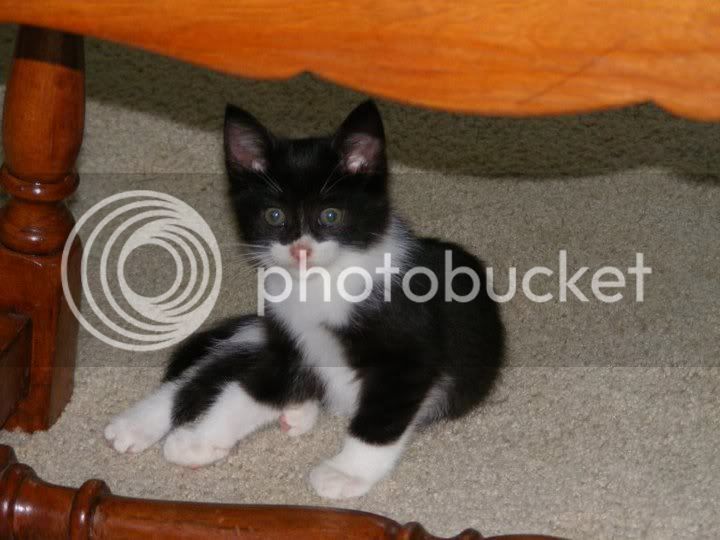 This is Lowell, the kitten that nearly tore my face off when I rescued him from a bush in a shopping center parking lot.

Yeah, that's kind of what he looked like when I pulled him from that bush.  Only add some growling and hissing and the stench of raw terror.  It definitely wasn't as EFFING CUTE as this.

Turns out he wasn't feral (as we had originally thought) and. . .look at that FACE. . .my sister has a soft spot for black and white cats so now she's a new mummy to what just may be THE cutest kitten EVER.

Lowell's been in my sister house for just shy of a week now and has already proven the old addage "Black and whitey, not to brighty" and has earned the nickname, Lower Case Dubya (which will morph into just Dubya as he gets bigger).

Now, form an orderly line so you can all kiss and snuggle him.

This is the text I sent to my wife this morning as I was (yet again) fleeing my own house due to in-law infestation:

And I'd like to add (for those of you who may think I'm just being mean and petty--hey, toilet seats break, right?) that it was not what I would consider a "normal" break.  It was complete and total toilet seat destruction.

THE LID WAS REND FROM SEAT.  There were actual SPLINTERS on the floor.  SPLINTERS!!

So it wasn't just an "oops, the seat cracked.  tee hee, time to go on a diet!" thing.  It was HULK SMASH violence perpetrated against my toilet seat.  The very same seat the wife and I had to go to THREE different stores to find.  (and that wasn't because we were being picky and wanted something fancy--the stores just did. not. have. the proper seat for some freakish reason).

I'm not sure what happened in that bathroom to cause such wanton destruction but I am sure I don't want to know.

I'm also sure that if I return home this evening and my in-laws are still there, the wife and I will be having words.  Strong words.  Bad words.

Yesterday I was all set to get my sim ON.  Big time.  I was going to burn the whole day working on the Parsons (VDSL) but. . .the computer had other ideas.

So, since I couldn't piss away my sunday playing pixel barbies (and my wife isn't back yet, so I couldn't annoy him) ( Collapse )

I wasn't going to rant about it, figuring it wouldn't stick around long enough that it was worth it but. . .

I hate that AXE ad on the login page.

It's just so tacky and STUPID and I'm ever so tired of seeing that one chick waggling her underwear wedgied cootch at me.

Don't make me get all Crumplebottom RAGE on you.

Because I am just THAT immature, I give you.

(totally work safe but folks will think it's dirty)

Personally, the only way I could ever PROPERLY memorialize Michael Jackson is with a wee (no pun intended) Emmanuel Lewis.

Yes, that would work.

(and really, the v-gift MJ glove thing is just bizarre, like when random strangers leave plastic flowers and stuffed toys in make shift memorials along the highway, but no marker as to who died there.  How is that not considered littering?)

Who here has sensitive skin or allergies or BOTH?